“When you’re up on top of a peak like that, it’s usually hang out for a second, and then it’s momentum,” Castillo said. “You just kind of feel it. Everyone’s like: ‘O.K., we’re not here to hang out. Let’s start going.’ So I saw people starting to slide, get going, and I was like: ‘Hey, Johnny, partner up. Buddy system. Let’s go. Me and you.’ And at that point, it clicked. Everyone’s like, yeah, partners, partners, partners.”

It is a tenet of avalanche safety, and the command snapped the group to attention.

“It just felt bigger all of a sudden.”

“I was really excited about that,” Saugstad said, “because he’s just such a cool guy and I thought, wow, cool, he wants to be my partner. A very trustworthy guy that’s an amazing skier.”

Wesley gave a little whistle to Carlson and Pankey and nodded downhill. He wanted to be first. The conditions were too good to waste time, and he did not want to be slowed by the huge pack.

With little warning, Wesley dropped straight through the large cluster of trees, using firs as a slalom course. Pankey and Carlson followed.

Rudolph, always up for competition, sped around the trees, not through them. He curved around a banked C-shape turn that dropped him a couple hundred feet into the broad meadow below.

He arrived just in time to see Wesley, Pankey and Carlson burst from the trees into the open powder. Rudolph pointed his ski poles and playfully shouted invectives as their tracks crossed.

Wesley laughed, and his two friends followed him left and over a small rise.

Rudolph headed straight down the mountain.

“I remember looking back at where he was going and being confused,” Wesley said. “Like, ‘Where is he going?’”

All the locals in the group presumed they knew what the others were thinking. They did not.

“When you know an avalanche is not very likely, that’s a great way to go,” Wesley said of Rudolph’s choice to ski straight down farther. “It’s three open glades of awesome powder.”

Earlier that morning, Wesley and Carlson had skied the opposite side of Cowboy Mountain, in the ski area. It had been cleared of avalanches by the ski patrol at dawn, but the two still triggered several slough slides — small, shallow avalanches that washed at their feet and petered out before snagging victims.

“That’s why, when they said we’re doing Tunnel, I was like, ‘Ooh, dicey,’” Wesley said.

Pankey and Carlson followed Wesley and looked back, too, wondering why Rudolph and the others were not following them toward relatively safer terrain. Within a minute, long enough to be well out of sight of the group they left behind, the three men found something that made them stop.

“We were right on top of a knoll, a little rollover, where we were about to make some really fun turns, and we saw that the face had already slid,” Carlson said. “It was pretty large.” 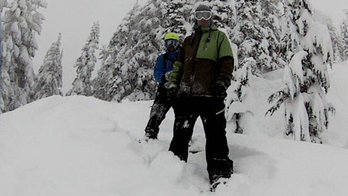 Signs of Trouble After breaking from the larger group, Ron Pankey and two others discover nearby avalanche activity.

Alarmed, the three decided to go farther left. They crossed through trees and avoided big meadows and steep pitches. They soon found evidence of another avalanche, this one cutting through the forest.

“I’d really never seen anything slide in the trees like that,” Carlson said. “And that was definitely like: ‘Holy cow, we shouldn’t be back here, Ron. Let’s go left. Let’s go hard left.’”

Wesley had disappeared in the pale light. He left nothing but a track through the deep snow that the others tried to follow.

“I just went, and didn’t really stop,” Wesley said. “I went all the way down. But I’ve never taken a run where I looked uphill more times in fear.”

Rudolph stopped on the left edge of the upper meadow, above a cluster of trees. Others filed behind him, spilling down the mountain in plumes of spraying snow.

Erin Dessert did not follow. She was confused. She was once a Tunnel Creek regular, until a nonfatal avalanche captured five friends in 2002 and scared her away.

“Chris Rudolph’s, like, totally all about safety protocol and mountain awareness and wisdom,” she said. “That guy knows the conditions like an animal. He has instincts. It didn’t register, even for a second, that he might be bringing this group to Tunnel Creek. It wasn’t logical. I thought we were doing the front side.”

She headed hard to the right, away from the others. The other snowboarders that she knew, Carlson and Wesley, were gone in the opposite direction. Some in the remaining group noticed Dessert heading away in the distance and dismissed her as an oblivious backcountry rookie. She dipped out of sight in a lonely panic.

“I’ve been riding Stevens Pass since I was 3 years old,” Dessert said. “I can tell circumstances, and I just felt like something besides myself was in charge. They’re all so professional and intelligent and driven and powerful and riding with athletic prowess, yet everything in my mind was going off, wanting to tell them to stop.”

Rudolph and the others, now a group of 12, were focused downhill. It was 11:52 a.m. Rudolph did not wait for the back of the pack to arrive before continuing to demonstrate the way.

“So Chris Rudolph went first, and then he pulled into the trees and we waited for a sec,” said Castillo, who was near the front of the group, wearing a helmet camera. “He goes out of sight and behind the trees. So I said, ‘O.K., Megan, go ahead, spoon those tracks, and you’ll see Chris on the left.’”

It was not Megan Michelson. It was Elyse Saugstad.

“I thought it was Megan,” Castillo said. “I said, ‘Are you Megan?’ She said, ‘No, no, I’m Elyse.’ That’s when I met Elyse. It was right there. And she made these turns that were like: ‘Aah, I think I know who that is. I’ve seen her name. Those are pro turns.’ She ripped the hell out of it.”

Saugstad traced through the knee-deep snow just to the right of Rudolph’s elongated S-shape tracks. She dipped through trees at a pinch in the meadow and disappeared out of sight. She crossed over Rudolph’s tracks and giggled. After about 30 seconds, she was back at Rudolph’s side, having cut left into a notch of the trees again. 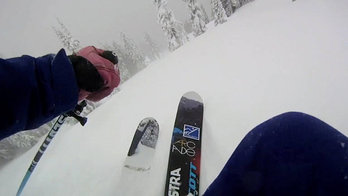 “We skied to an area that was probably about 500 feet down or so from where we started,” Saugstad said. “And where we skied to was an area of old-growth trees. You know, several-hundred-year-old trees. A very good indication that this is a safe place. Things don’t happen here.”

Castillo and Brenan teased each other about who would go next.

But just before he stopped, Castillo was jolted by a weird sensation.

“A little pang, like, ooh, this is a pretty heavy day out here,” Castillo said. “Thing’s holding, but I remember having a feeling.”

Castillo stopped above two trees. He nestled close and pushed his right ski tight against them.

“A lot of people think you should be below trees, but I stand above them,” Castillo said. “I’m like, ‘I’d rather get pinned against this than taken through.’”

“That was sick!” someone shouted.

“I was downhill from them — skier’s right from them,” Castillo said. “But the trees that they were behind, I didn’t think it was a bad spot to stop. They were huge. Giant old-growths that three of us probably can’t put our hands around.”

But he knew the direction of the slope did not follow the meadow. It dipped harder left into the trees, down toward a gully. And there were still a lot of skiers above them.

Saugstad was next to Rudolph. Brenan was a few feet away.

“We weren’t straight across from each other, in a perfect horizontal line on the slope,” Saugstad said. “We were peppered up and down, spread out.”

Castillo kept his attention up the hill. Less than 30 seconds after Brenan stopped, he saw Tim Wangen cut through the trees above the earlier arrivals, gliding horizontally through the forest. Wangen had been taught how to navigate Tunnel Creek by his father. He knew that the farther down the mountain he went, the harder it would be to cut over the ridge and into the next big meadow. He crossed the shallow gully and rose up the other side.

Wangen had told Peikert to follow his tracks, and Peikert was close behind. Castillo watched where they went.

“Want to cut over?” Castillo shouted to those above him.

The start of an avalanche is unlike any other force of nature.

A hurricane is foretold by wind and lashing waves. A tornado often is spotted before it strikes. Lightning is usually presaged by black clouds and rumbling thunder.

Avalanches rarely provide such a warning. Unlike waves or wind, tremors or storms, they are usually triggered by their own victims, sometimes unaware of what has been unleashed.

“If you swim out in the ocean, the ocean’s always alive,” Saugstad said. “You can feel it. But the mountains feel like they’re asleep.”

Back up the mountain, Jack never seemed worried. That was his nature. Here he was, a rare weekend off, skiing with some of his best friends from Leavenworth and people from Powder and ESPN and all over the industry, on an epic run on a perfect powder day.

Carlsen, the Powder photographer, had never been to Tunnel Creek. The first few easy turns gave way to a slope that fell steeply away, out of sight. He sidled up to Jack.

“I grabbed him, and I said, ‘What is the move here?’” Carlsen said. “It was basically like, ‘This is getting real, how do we handle it?’ He’s like: ‘Oh, no big deal. We go out here, swing out, make a few pow turns, and get back in the trees.’ I looked at him and said, ‘Have a great run.’ Gave him a fist, a knuckle-to-knuckle high-five thing. And that was it. I watched him swing out, way out, skier’s right, and then dive into his turn left.”

Jack flowed through the thick powder with his typical ease. He skied the way other people walked down a sidewalk, a friend had said.

Jack disappeared over the knoll, gliding through the trees in the middle of the meadow. Behind him, the five remaining skiers watched in silence.

“He looked like he was having a great time, the run of his life, in fact,” Michelson said. “And he actually made, I remember, a little ‘woo’ sound, as he dropped in on his first or second turn because the snow was really good. It was deep and light.”

Then the snow changed without warning.

Across the meadow, above Jack, loose snow seemed to chase him down the hill and out of sight.

Not everyone saw it. A couple did. They caught it in their peripheral vision and were unsure what to make of it.

“That was sketchy,” Hammond said.

The five others listened. Not a sound. They stared for clues through the flat light below a murky sky. Nothing.

Silent seconds ticked. Finally, Hammond spotted the first sign of evidence. It came from a tree, one among thousands, far down the hill, almost out of sight. Only the top of it was visible, and it was covered in snow.

“I saw it moving,” Hammond said. “Like something had hit the tree, and it shook. And I could see the powder falling off the tree.”

The Avalanche at Tunnel Creek

Read The Avalanche at Tunnel Creek by New York Times

The Everest of cave diving: Australias most mysterious cave system and the incredible story of how an expedition survived after being trapped for 27 hours

Read The Everest of cave diving: Australias most mysterious cave system and the incredible story of how an expedition survived after being trapped for 27 hours by Daily Mail